Fat! We can’t use that term anymore, apparently it’s quite non-PC. The word to use is obese.

He was known as the Fat Owl of the Remove. Obese Owl of the Remove just doesn’t have that same ring about it. And what is ‘the Remove’? It is the lower Fourth Form in public schools or in modern parlance – Year Ten.

For those of us who never went to public school much of Billy Bunter’s life at Greyfriars School was a complete mystery.

As was those of his companions – Harry Wharton, Bob Cherry, Hurree Jamset Ram Singh (Inky to his non-colonial chums), Frank Nugent and Johnny Bull – known as The Famous Five or Harry & Co.

Can’t help wondering if J K Rowling was a fan. Greyfriars School presented a world of privilege unknown to the working classes but one in which they could empathise owing to the oft put upon and usually bullied Billy Bunter.

He wore small round glasses hence the ‘owl’ and was large, fat if you will, always looking forward to the next hamper from home which was either confiscated by Mr Quelch the House Master or one of his class mates. At which point he would often exclaim: “I say you fellows”; or “Oh really Wharton” (or whoever is speaking); sometimes accompanied by his characteristic giggle, “He, he, he”; and the exclamation of pain, “Yarooh” (which is “hooray” spelled backwards) – a few of Billy Bunter quotes which became national catchphrases. 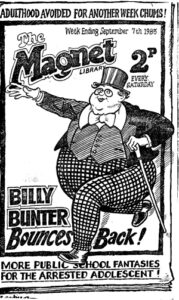 A front copy of the Magnet comic featuring Billy Bunter

The Magnet and it’s fellow publication the Gem were popular boys comics from the turn of the twentieth century to about 1950 by which time two world wars had destroyed what was left of the days of innocence.

So Billy – one more last cosmic Yarooh! When will we see your like again!

In the meantime here is a selection of Billy Bunter stories – from Amazon.

This page and more in a similar vein comes from a collection in my eBook.  So! You want to be British . Further selection of articles: British beer mats – Billy Bunter – Desperate Dan – Gladys Leap – British Seaside Holidays – Slang terms in pre-decimal currency – The Mousetrap – Tiddlywinks