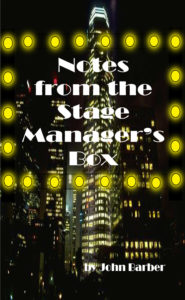 This book is the story of my time with the National Westminster Theatre Club.

It is a progress from unwilling volunteer in a One Act Play to novice stage hand and Stage Manager ending with a successful stint as producer for Grease.

There are tales of production disasters, memorable performances and the funny side of staging a show from the auditions to first night mishaps.

The book concentrates mainly on the eccentrics and the things that can and usually do go wrong on stage seen from the viewpoint of a Stage Manager.

It is also a personal account looking at ten years of the Theatre Club’s history from 1978 to 1987. Now renamed the RBS Theatre Company it is the oldest active Club of its kind since being formed in 1876.

You will meet a lot of warm, talented people who worked for the Bank and became a close group of actors, singers and stage crew.

There are accounts of the staging of shows such as Oklahoma, South Pacific, Calamity Jane, Fiddler on the Roof, Grease and other less well known shows such as No, No Nanette. There are also a few black and white illustrations.