The reading of Arthur Brown’s will threatens to expose some sexual relationships that a few of  Fordhamton’s residents would prefer to be kept well hidden.

Tim Rice is on a management course at Oates Hall, CCS Banking Group’s Training Centre. He is abandoned in the countryside as part of a company training exercise.

Tim’s attempts to get back to Oates Hall are sabotaged by a series of minor criminal acts and events completely out of his control.

Every time the police arrest him and release him he finds himself deposited back in Fordhamton.

Totally exhausted he finds a safe haven in the bed of a local journalist.

Unbeknown to him Oates Hall has been quarantined. He has become the object of a manhunt as the suspected carrier of an outbreak of a nasty virus spread by Gryphon bats.

When a film studio streaming live sexual activity for the over 60’s is discovered to be operating in the middle of town Acting Detective Inspector Miles Davis is sent back to Fordhamton.

Davis knows there is a conspiracy afoot but no idea what it is. In his own inimitable style he manages to bring all the strands of his various investigations to a satisfactory conclusion.

A background to Fordhamton can be read here. 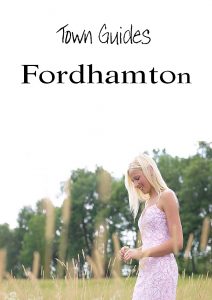