Hidden Hertford was established in 2008. It was formed following an approach by Hidden Britain, itself a section of Visit Britain. The aim was to bring Hertford to the attention of a wider public by promoting social, historical and architectural features that were largely unknown or ignored.

This was not welcomed by either Hertford County Council or East Herts District Council so the idea of launching a heritage tour with its own website was really a personal crusade alongside my existing role as Town Centre Manager.

Myself and a colleague raised substantial funds from various sources such as the National Lottery Awards for All, Action for Market Towns, Grown in Herts, East of England Development Agency amongst others and eventually Council.

The money was used to fund new information desks for Hertford Museum and education days and support for exhibitors on our Farmers Market.

A photographic tour of Hertford was overlaid with descriptions of buildings and other interesting heritage locations written by myself and recorded by a BBC trained commentator. These were combined into both an audio file and AV file that could be downloaded on to a suitable device. The commentary was also translated into French, German and Polish. Both MP3’s and ipods were made available for hire from various points around town.

Unfortunately Government cuts meant that the scheme could not be expanded the way we would have desired and it was closed down. However some of the original material remains. The AV tour is very out of date now as many shops and locations have closed, changed name or no longer exist.

It is possible using Google maps for you to experience the flavour of this tour and to offer visitors a tour of the town using their own mobile phone, tablet or other portable device.

The original A Walk Through Hertford map is also available as a pdf file to download which also offers a visual guide to the town. It is offered ‘as was’ as much of the accompanying information is now redundant.

I have now published a 24 page booklet with colour photographs which can be purchased for just £3.99 from Blurb. Here is a preview. 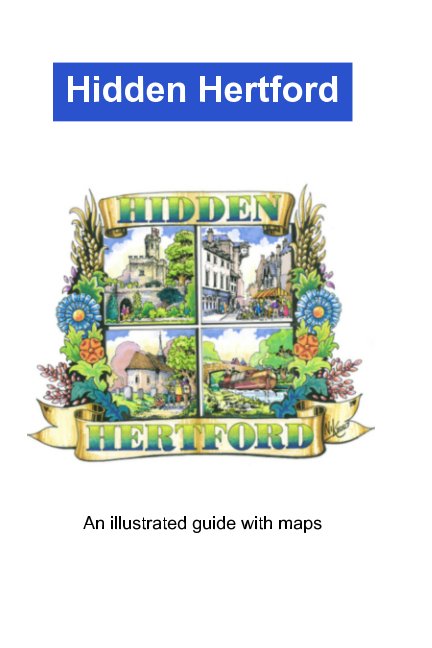 This is based on the original tour with street maps to guide you around and colour photographs throughout. There is also added material such as vanished pubs based on the Alternative Hertford Pub Crawl and a brief guide to some of Hertford’s best known ghosts.

I hope you can enjoy this Hidden Hertford tour again as was intended when it was envisaged.

A short guide to Hertford

A short history of brewing in Hertford

How Easter originated in Hertford

Hertford 1861 as recorded by Bradshaw