Strangely enough Folly Island is not a natural island. I always thought so until I was doing a bit of research using Rosemary Bennett’s excellent ‘Folly Island’ and discovered that until 1772 the island was connected to the mainland at Dicker Mill. A strip of land was dug out to make it easier for barges to navigate to the town centre.

In these difficult days living on a island should make it easier to self-isolate. Not so, obviously. See Google map below with arrows pointing to the bridges connecting us to various parts of the town. 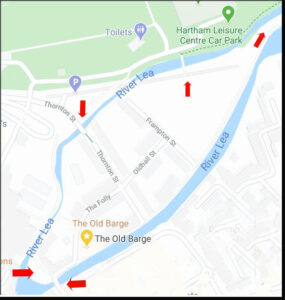 The devil in me says we should demolish these bridges like a medieval Lord of the Manor pulls up the drawbridge and fills the moat with hungry fish. That would truly isolate us all.

Many many recall my failed attempt to stand for Hertford Town Council at the last local elections. If you were to read my manifesto it does offer a plan towards isolation and protection.

I am once again confirming to those who know me that I still lapse into flippancy and am often irreverent. I am guilty as charged.

I have several titles concerned with local issues at Smashwords.

The Mysterious Death of Sarah Stout – the true account of the daughter of a Quaker brewer found drowned in the River Lea in 1699 by what is now Priory Street; and Spencer Cowper, the man accused of her murder.

The Wicked Lady – Katherine Ferrers, was she really the highwaywoman of legend, or been harshly treated by history.

All my previous posts archived here:

A Time to Remember

A Message of Hope